I finally watched the MSN video that I talked about here. 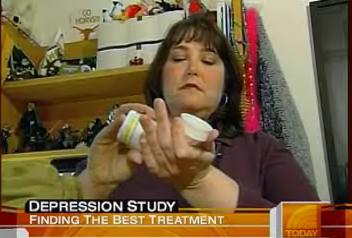 As I predicted, it was extremely lame. It was a pitch to get on depressed people on antidepressants. The 1 minute 18 second video from Today stated the following:

The accompanying article also states that 13 percent of the 123 study participants who did not get better on the first three drugs they tried were helped by a fourth. If I’m correct, essentially 16 people were helped after trying four different antid’s. The article says 37 percent went into remission after starting Celexa (citalopram), made by Forest Laboratories. That would mean about 46 people saw immediate remission of symptoms. The rest – 77 people now – “switched to another antidepressant or continued with Celexa and added a second treatment.” The second round on the merry-go-round helped 31 percent of the remaining group: 24 people. Ok, so we’re now down to 53 people who haven’t been helped. The third attempt – whatever that was, the article doesn’t say – had a 14 percent success rate: 7 people. And the fourth attempt had a success rate of 13 percent of the leftovers: 6 people. That means 40 people were NOT helped by antidepressants are these combination of treatments. Therefore, “67 percent of the total group had been helped by one or more drugs.” Nice pitch.

Here’s where the Today video fails to educate its viewers:

END_OF_DOCUMENT_TOKEN_TO_BE_REPLACED

What? Doctors don’t prescribe enough drugs? You have GOT to be kidding me. [I didn’t watch the report (work blocks access to this kind of stuff), but it’s probably way off regardless.] On a semi-rant, though, if 22 million Americans are suffering from clinical depression at any given day, do all 22 million REALLY need to be on antid’s? Seriously. It’s like pharma companies are in the poor house and need this NBC report to boost sales. (Ugh, who paid Today for this “free” ad spot?) (article source: Uncomfortably Numb)