Yes, you read that right. Eli Lilly has reached a settlement for $1.42 billion with the U.S. government over the illegal off-label marketing of Zyprexa. The company also pleaded guilty to criminal misdemeanor charges. Basically this is how I see it:

U.S. Gov’t: Eli Lilly, you did a bad, bad thing by doing illegal things. Pay a fine, please, and then you can go.

Eli Lilly: Okayyyy. [reluctantly hands over $1.42 billion to the government]

It’s a record settlement for a whistleblowing case. According to Philip Dawdy at Furious Seasons, Eli Lilly has paid over $2.7 billion in settlement payouts so far. (With certainly more to come.)

I’d been meaning to talk about this story but it’s progressed faster than my typing hands can keep up.

An e-mail sent around at the Veterans Health Administration among Dr. Ira Katz, the VA mental health director, and other officials, discussed the issue of hiding the number of suicides committed by veterans from the public—an estimated five out 18 of them being under VA care. Now, a number of senators (and bloggers) are calling for Katz’s resignation.

END_OF_DOCUMENT_TOKEN_TO_BE_REPLACED

Wow. I learned something new – “Women are over-represented in all cases of” depression, anxiety, dysthymia and panic attacks. Read more here.

An interesting observation from Gretchen Rubin, blogger of The Happiness Project.

Graham’s Blog has linked to interesting fashion jewelry: Made with Molecules. For only $20, you can:

“Display your favorite neurotransmitters close to your brain!”

Erhm. The very thought of this disturbs me. Also feel free to purchase a serotonin-happiness card or a dopamine-heart card – just in time for Valentine’s Day. 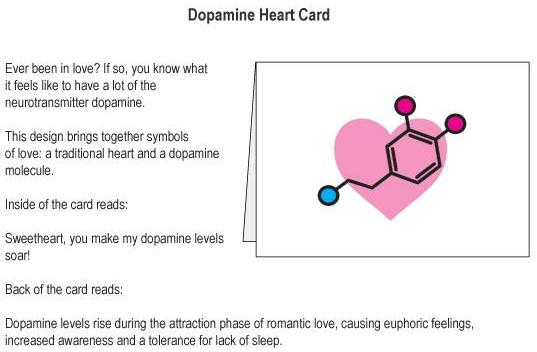 Pfizer is cutting 10,000 from its workforce citing nothing other than loss of profits:

“The drug giant Pfizer said Monday that it would lay off 10,000 workers and close several manufacturing and research sites in an effort to bolster earnings hurt by the loss of patent protection on certain drugs and by setbacks in developing new products.”

I’ve mentioned patent protection before but it seems that Pfizer isn’t generating enough “structurally related” drugs to prevent the loss of its profits to generics. The two biggest losses: Zoloft and Zithromax.

“Pfizer said the moves would save $1.5 billion to $2 billion a year in pretax expenses.

Pharmaceutical industry analysts have generally been welcoming cutbacks by Pfizer but have said that while cost-cutting is beneficial, the company needs to resume growth by bringing new products to market.”

Pfizer’s a big company; I’m sure they’ll have no problems rebounding. However, I have no doubt that the failed torcetrapib factored into Pfizer’s decision to cut staffers.

A Philly plaintiff in the Vioxx suit against Merck has willingly withdrawn her suit. She cannot refile against Merck.

“Merck has consistently said it will fight each case on a one by one basis rather than submit to a large settlement.

In trials that have reached a jury verdict so far, Merck has won nine and lost four, including one Merck victory that since has been thrown out.”

The legal fees surrounding the Merck case must be astounding, but is it really worth it for Merck to drag these cases out against 27,000 other plaintiffs? I would assume on Merck’s part that it would be cheaper to settle. But then again, maybe it’s the whole “we need to clear our name” thing. That’s a fast way to lose profits for a pharma company.