My husband and I are talking about expanding our family. While that sounds all well and good, I just have one issue:

For most women, they think, “Well, I want a kid” and the most they have to do is probably get off birth control. Just finish off their contraceptives, maybe feel a little nauseous, and move forward with their plans.

(sigh) Not me. If I want to do this right, it might be a good 6 months or so before I can consider trying.

Here’s the thing: Despite the recent discovery that Lamictal performed no better than placebo, I can’t deny that the medication has worked wonders in my life. My mixed episodes are practically zero, my suicidal thoughts—for the  most part—have been kept under control, and I haven’t had any suicidal impulses. Just a lot of ideation. And for me, there’s a huge difference between the two.

I’m currently on 200 mg. Do I have any side effects? Probably. I’m not wholly sure but my best conjecture is that I often suffer from fatigue and blurry vision. If I look at a TV from a sideways angle, my vision gets blurry and crosses. I don’t remember that happening before. As for as I can think of, I haven’t had any other serious side effects other than those two.

Sometime last year, I dropped down to 150 mg in the hopes of getting off of the drug since I’d been doing so well. My doctor chewed me out over it and told me it wasn’t wise.

“You wouldn’t stop taking your blood pressure medication if you were doing well, would you? Lamictal’s a maintenance medication. You have to take it to keep doing well.”

And like I said, for the most part, I have been doing well. Two years ago, I mentioned my concern about being pregnant on Lamictal:

I’m currently wrestling with the idea of having a kid soon. My husband and I talked about it and we knocked all  of our concerns down to the medication issue. I’ve been doing really well on the Lamictal, but there are warnings all over the prescription that say “Do not take while pregnant.” My doctor’s pretty much, “You need to outweight the benefits vs. the risks.” He said there’s a slightly increased chance of my kid developing a cleft palate but not much more than the average population. … I’d like to nurse my kid and I don’t want it to nurse on Lamictal. 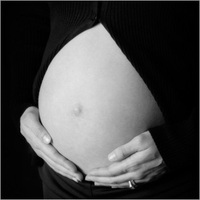 Two years later, the concerns haven’t changed. My doctor will probably be resistant about it, especially when I expressed this concern and he said something about it being a Category C drug and the risk increases slightly but not by much and blah, blah, blah. I have to consider whether the benefits outweighs the risks and for me right now, it’s the opposite. I am adamant about not having a child while on Lamictal. Just like I’m adamant about not taking topical steroids while pregnant. (FYI, doctors say that it doesn’t go into the bloodstream but the patient safety information says “That it is not known whether the medication is absorbed into the bloodstream.”) If moms do everything they can to protect their children, I sure as hell will be part of that group.

According to epilepsy.com (remember, Lamictal [lamotrigine] is an anti-seizure medication), the risk of a child having a cleft palate while the mother is on the drug is 24 times higher than normal. Why expose a baby to that? Even GSK warns in its patient safety information:

Not only that, I’d like to breastfeed my child and studies have shown that indeed the medication does pass through the breast milk. To be honest, the main reason for it is quite silly.

“Every mom in my church does it.”

After being at my church for 2 years, several women have had a baby and every one of them has breastfed their child. I’d feel like an oddball sitting there, feeding my kid formula. I was raised on formula and I guess there’s nothing wrong with but I think that breastfeeding is better for a child anyway. And there’s no need for a healthy child to be ingesting medication that it does not need.

So this is what I’m currently facing. I have an appointment with my doctor in February and I’m going to drag my husband along with me for moral support. I know it took Gianna at Beyond Meds 2 years to come off the drug but—and I know she’ll tell me this isn’t wise!—don’t plan on taking that long to withdraw. I plan on taking 4-6 weeks, depending on the severity of side effects, to come off of the drug. From 200 mg to 150 mg to 75 mg to 50 mg to 25 mg. I expect the 150 mg to 75 mg drop to be a doozy. And lately, I’ve been obsessed with the idea of suffering from seizures, a problem that I’ve never experience, but the idea scares me. Apparently, I have good reason:

About 20% to 35% of women have seizures more often during pregnancy because of changes in hormones or changes in how their seizure medicine is handled by the body. This appears to be particularly true for Lamictal. (epilepsy.com)

Rachael over at My Bipolar Pregnancy said that she decided to take Lamictal during her second and third trimester and it turns out she had a healthy baby daughter. While at the hospital, a nurse told her that her daughter had been on Lamictal without any issues:

She also told me that her daughter used Lamictal while breastfeeding and had no issues. Which was nice to hear since I too am now breastfeeding.

I’m happy that things are working out for Rachael and the nurse’s daughter but it’s not a chance I’m willing to take if I can help it.

18 thoughts on “Lamictal in consideration of pregnancy”