Dawdy at Furious Seasons wrote a post on an editorial in the LA Times by Summer Beretsky’s experience with Paxil. After reading her editorial, I’m reminded that my own experience with one antidepressant wasn’t all that unique. Her drug was Paxil for panic attacks; mine was Lexapro for depression following a 3-month (on-and-off) stint with Paxil. I’m struck by the similarity of our experiences; not only did the same thing happened to me but I was also a communications major in college as well.

Paxil had one pretty undesirable effect on me: I started to lose interest in just about everything. I stopped initiating social activities (who needs that sort of thing?) and was no longer motivated to perform well academically.

My emotions had flat-lined: I hadn’t cried in months, nor had I proverbially jumped for joy. I felt — nothing.

I can still remember sleeping in bed at home on a weekday when I should have been at class. It was 2 in the afternoon, around the time my copy editing class was to begin. My boyfriend at the time (now my husband) lived in Kentucky while I attended college in New York. He planned to visit me that weekend but was getting fed up with my depression and listlessness. He called from work to tell me to get up and go to class. I mumbled on the phone, half-confused, and said no. He demanded, “Why not?” I said quite plainly, “Because I don’t care.” He said, “If you don’t get up and go to class, I won’t visit you this weekend.” 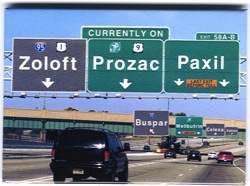 The girl kidnapped by Lexapro did care. She was just too drugged to think she cared. Without Lexapro, all she wanted to do was commit suicide. With Lexapro, she didn’t have enough energy to lift a finger, let alone attempt suicide. (Side note: I somehow managed to fly through my copy editing class with an “A” despite the fact that I failed to show up more than half the time.)

Like Beretsky, I quit Lexapro cold turkey. Unlike her, however, I never  went back on it. Of all the drugs in the world, psych meds are NOT the kind of medication that anyone should quit cold turkey.

The great withdrawal debacle began. First attempt: cold turkey. This was a regrettably poor decision, as I spent nearly a whole week with the “brain zaps,” an electrical shock sensation that would travel up my spine and into my head. Not to mention, I couldn’t keep my self awake, and I was terribly dizzy.

While I didn’t have “brain zaps” (also called “brain shivers“) on Lexapro, I had the privilege of relapsing and attempting to commit suicide. At this point in time, I’m thankful that I didn’t go through with it. I’m also thankful Beretsky is at a point in her life where she is able to work through her panic attacks without the use of medication.

We live in a quick-fix world. You want a burger? Go to the drive-thru and you’ll have one in less than a minute. You want to change the channel on the TV? Don’t bother getting up; just use the remote.

And likewise, for our panic attacks, we expect to find instant solutions behind the pharmacy counter. But quick fixes aren’t always the best long-term solutions. Paxil was a merely a bank loan that I had to eventually repay with interest.

I’m thrilled to be so young and so in control of something that had once stopped my life in its tracks.